May 16, 2018 by Leon Valley Veterinary Hospital 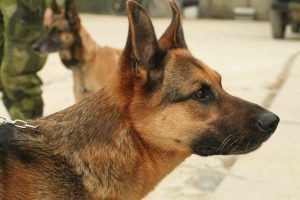 Memorial Day offers a unique opportunity for Americans to honor the brave men and women who have served our country at home and abroad. Observing a moment of silence for fallen soldiers, decorating a grave, or attending a ceremony is immensely important.

While we reflect on these sacrifices, the faithful, valiant contributions of thousands of military dogs should also be remembered. Without the aid of K9 veterans, the list of casualties would be much longer.

Memorial Day, or Decoration Day as it was previously called, was established to honor those Americans who gave their lives in service. More recently, the national holiday has evolved into an opportunity to thank those who are currently serving – or have retired from – active duty.

The Quartermaster Corps initially developed the concept of Military Working Dogs, or War Dogs, during World War I. The program, however, didn’t get official recognition until World War II. These animals were highly trained to locate wounded soldiers and downed pilots, alert comrades to intruders, and sniff out booby traps, bombs, snipers, and enemies waiting in ambush.

There are over 2,500 active duty military working dogs serving in our armed forces. While they play a critical role during combat, retrieval, and protecting against enemy fire, they’re vital in the search and recovery of explosive devices in the field. After all, the sniffers of K9 veterans are almost 100% accurate!

Over the years, these amazing animals have saved the lives of countless military (and civilian) men and women. K9 veterans are also responsible for bolstering the spirits of their handlers and soldiers in their units.

March 13th is K9 Veterans Day, but due to their sizable contributions to America’s military, it’s perfectly appropriate to honor them alongside fallen soldiers on Memorial Day.

American Humane is a leader in animal welfare and is a partner of the U.S. military that helps Americans pay tribute to K9 veterans and their handlers. They assist in training, matching, and reuniting K9 veterans with the soldiers who cared for them during service. This organization also provides emotional support training to shelter dogs so they may help veterans struggling with PTSD and service-related trauma.

Do you know of an outstanding dog who deserves to be recognized? Nominate them for a K9 Veteran Medal of Courage.

By recognizing the impact of K9 veterans, we can ensure they have a happy, healthy retirement. They’ve truly earned their place among America’s greatest heroes.

From all of us at Leon Valley Veterinary Hospital, we wish you and your family a peaceful Memorial Day.

Tags: k9 veterans | military dogs | Working Dogs
Posted in: You & Your Pet
Previous: 5 Dog Training Basics Every Pet Owner Should Know
Next: Does My Dog Need a Diet?